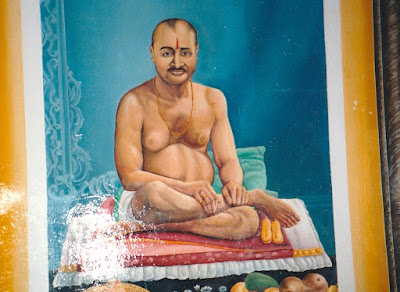 Siddharameshwar Maharaj
Guru of Nisargadatta Maharaj (and many others)
Questioner to Nisargadatta: “Does Maharaj consider
himself  as following in the footsteps of his Guru?”
Maharaj: “He has no footsteps. He has no feet.”
(Seeds, p. 121)


In December 1989 I traveled for the first time to India. As I was deeply touched by the Advaita teachings of my teacher Alexander Smit and his teacher Shri Nisargadatta Maharaj, I was eager to know more about its background. Everything Nisargadatta told about himself and his Guru Shri Siddharameshwar Maharaj in I Am That felt as a great example. To me, these descriptions were the most beautiful I knew about the teacher-disciple relationship. That’s why I wanted to taste the atmosphere of what is still left of this tradition, this guru-parampara, or guru lineage. ‘Inchageri tradition’[1] it was called, after a small village in northern Karnataka.


Inchageri. That’s where I wanted to go, that became clear to me. 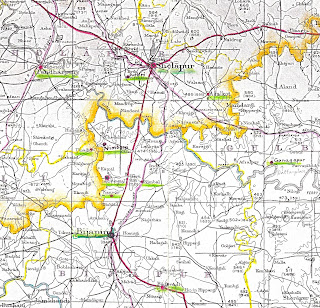 Here you see him in his usual foldaway seat. The sunglasses he wore almost always due to an eye disease. Here we all together do bhajans, which amounts to some singing and rhythmic clattering of cymbals, whereby one repeatedly makes a rotation with the body. Bhajans (songs) are sung as a tribute to the Guru, in this case to Siddharameshwar Maharaj.
On the big picture you can see Siddharameshwar again, with the small portrait of Bhausaheb painted in it. At the right the mother of Ganapatrao. Here, just as in the main hall, the picture frames are painted as well, very nice; also the Marathi-quote top left. Only the portraits at the bottom (the same teachers again) are ‘real’, movable objects; the two packed books at the right are both editions of Dasbodh. One is a Marathi edition, the other a translation by Ganapatrao in Kannada, the language spoken in Karnataka (the letters that are visible in the lineage tree photograph, are Kannada script). 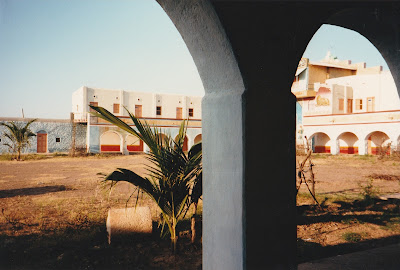 I have stayed a few days at the ashram; I found it a very pleasant place. Here you see the courtyard. It was usually as peaceful as at the picture.
The manager, Ratnakar Kulkarni, with whom I had a nice contact, was so kind to guide me in a taxi to the surrounding villages, and to tell me many details about it.
First of course to Inchageri. 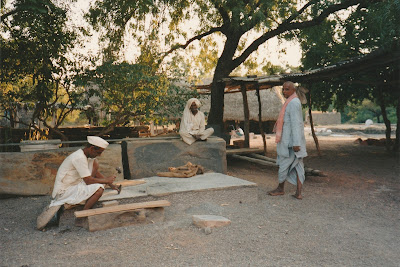 I still remember how it felt when we arrived there. It seemed as if these three men (and the fourth in the background) were all that the term ‘Inchageri’ implied. ‘The Inchageri tradition: would this be it?’, flashed through me. It was a very beautiful and peaceful scene, no question about that. Then I discerned a few small buildings, that appeared to be the actual math. The building at the left turned out to be a temple dedicated to Siddharameshwar. The right-hand building contained the samadhi of Bhausaheb and his Guru Nimbargi,[14] which were placed opposite to each other, at the opposite sides of the room. This is the Inchageri tradition, the origin of the lineage in one room. I spent some time sitting on my own, near the samadhi of Bhausaheb (who felt a bit like a great-great-grandfather to me).
In the left building, dedicated to Siddharameshwar, I found a few pictures of him – confronted with one of them I found it hard to suppress a whoop of joy because of its direct effect and beauty (I knew till then only one photo of him, which had never really touched me). When the people who were present felt my love for their great Guru, they offered me the photo, for a small donation. O! That moment was beautiful. I was really touched. 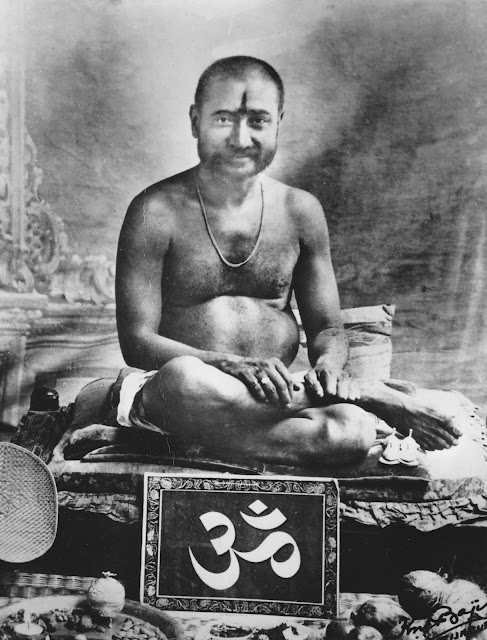 My joy was great again when I later, back in Amsterdam, showed the picture straight away to Alexander: I believe I had never seen him so elated. Years later, a parallel photograph of it became known, by being depicted on the cover of the book Master of Self-Realization – a shot without the OM symbol in the foreground.


I also bought a beautiful picture of Bhausaheb Maharaj, and I photographed a mural of his Guru Nimbargi Maharaj (Nimbargi’s original name was Narayanrao, and he is also known as Gurulingajangam Maharaj, but mostly he is called after his village Nimbargi). 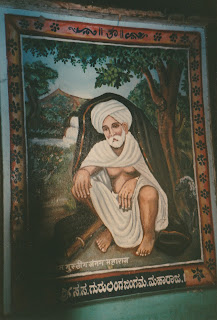 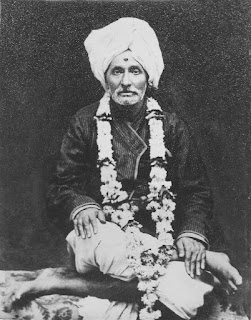 Then I went along with Ratnakar to the village Nimbargi. You see Ratnakar on the photo below, standing left in the background, with the black cap. The man next to him, with the yellow turban, is the very spry great-grandson of Nimbargi Maharaj. We are here again singing bhajans, around the samadhi of Nimbargi, which is only partially visible. 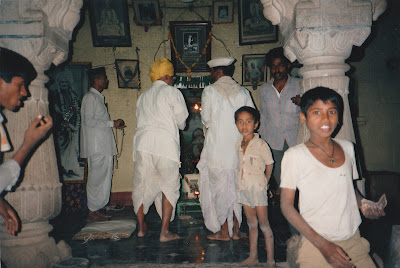 Ratnakar and I paid a short visit to Nimbal as well that day, where a math is built near the samadhi of Professor R. D. Ranade.

The next day I went on my own to Bagewadi, just southeast of Bijapur. Here Siddharameshwar lived – it has been more or less his home base; it has been described as the place where he, after a tour of lecturing at several places, could rest. In his house is his samadhi, which you see on the left picture.[15] 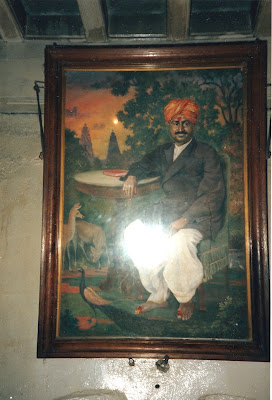 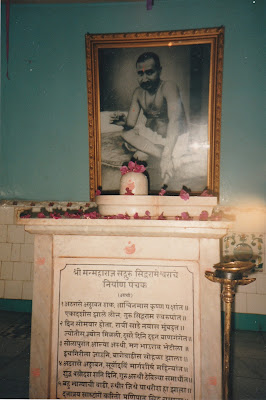 Later, a white marble statue of him has been placed on top of it, but when I was there only a linga was on top. In the background, the picture that for years was the only one which was known in the West. Furthermore virtually nothing in the room. In his house was also this painting of him. 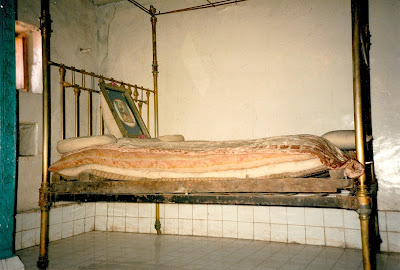 In the picture above you can see the bed Siddharameshwar built for his Guru Bhausaheb (then deceased for years already), with his framed picture put on it. The right picture shows me, in that room. An Indian man being present suggested to photograph me thus.

A few weeks later I returned to Bombay. I visited the room of Nisargadatta I had heard so much about from Alexander, in 10th Lane, Khetwadi. Nisargadatta’s daughter let me in and showed the room. The whole interior, with all the pictures of the Gurus, was left in completely the same state as it was in 1981 when he died. I was allowed to abide there for a while on my own, which I considered extraordinary. It went through me how much I owe to Alexander, to Nisargadatta, and also to his Guru Siddharameshwar. 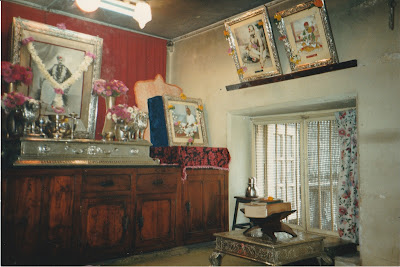 I wrote in my book ‘I’ is a Door[16] that for me three teachers of the twentieth century remain as truly great, by which I mean that they are the ones who have influenced all the others. They are the real Sad-Gurus. Increasingly, I started to feel that there is a fourth: Siddharameshwar. He is, as I said, the one to whom we owe the specific teachings that we usually refer to as ‘typical Nisargadatta’. Although the transmission of it by Nisargadatta was more attuned to Westerners and is therefore in some way more digestible for us, the true origin of it lies with Shri Siddharameshwar Maharaj.


N.B. Here I would like to thank Ratnakar Kulkarni, who handed me all sorts of details verbally and via airmail letters, and to Shri Ranjit Maharaj, who has made efforts to capture the life story of his Guru Siddharameshwar, Master of Self without self.

Notes
1. In most reports on this tradition it is mentioned that this is a Nav Nath tradition (‘the Nine Masters’). How important this is in itself, I still have noticed increasingly that this element can distract quickly, and could lead to conclusions that have nothing to do with the Inchageri lineage that is being discussed here. The Nav Nath traditions are so widespread and of such different character that it gave me a feeling of ‘too much’ to go into it. If someone is interested in details about the Nav Naths: the most informative book on this is The Alchemical Body. Siddha Traditions in Medieval India, by David Gordon White. Chicago: University of Chicago Press, 1996. Also highly recommended, especially on the Nav Nath tradition in Maharashtra, is the Introduction by Shankar Mokashi-Punekar to Shri Purohit Swami’s translation of Avadhoota Gita. New Delhi: Munshiram Manoharlal, 1979; p. 1-73.
2. The murals in Kannur are painted by Bhimrao Jambagi. What looks like the frames of the paintings is in fact painted as well.
3. Bhausaheb was a contemporary of Ramakrishna, 1836-1886, and Shirdi Sai Baba, ± 1835-1918. He was initiated by Nimbargi Maharaj in 1857.
4. R. D. Ranade’s well-known book on this is Mysticism in Maharashtra. Pune: Bilvakunja Publishing House, 1933.
5. Pathri: this is 12 miles west of Sholapur. In those days there were no states like Maharashtra and Karnataka yet; though the language border between Marathi- and Kannada-speaking people was already here in this area, but administratively it was all part of the Bombay Presidency of British India. Siddharameshwar spoke both Marathi and Kannada fluently. The letters appearing in the picture of the lineage tree, under the guru portraits, are in Kannada script. Before the time of Siddharameshwar the Inchageri tradition was a Kannada-speaking tradition. Due to the fact that he originated from the district of Sholapur, and so often had to stay in Mumbai, the tradition has become Marathi-speaking as well. Moreover, he could teach the many Gujarati-speaking disciples fluently in Gujarati.
6. See Preface of Master Key to Self-Realisation, 1994 edition; p. vi.
7. Master of Self without self; p. 115-116.
8. Master of Self without self; p. 67.
9. Sadguru Nisargadatta Maharaj, Life & Teachings, by G.K. Damodara Row; Bangalore; p. 24.
10. It is to be found in Master of Self-Realization, from page 247 (which involves a lecture from September 1935). In the biography, Master of Self without self, this is described on page 126. In most classical texts, including Buddhist, the word vijnana is used just to denote ‘consciousness in its usual or ordinary sense’; sometimes also to denote discrimination or insight, but mostly this concerns a less ‘wide’ (or less ‘deep’) insight or knowledge than jnana.
11. Master of Self without self; p. 126.
12. A samadhi is a temple or tomb built to honor a Guru, wherein the ashes of the Guru are kept.
13. Shri Ganapatrao Maharaj was born in 1909 and deceased in 2004.
14. Nimbargi’s ashes are divided between the samadhis in Inchageri and Nimbargi.
15. Although I did not find this in the biography, but a part of his ashes must have been brought back to Bombay, where at the Banganga Cemetery (exactly at the spot where he had been cremated) a samadhi of him is erected as well. Nisargadatta visited this samadhi regularly.
16. The book ‘I’ is a Door is published by Zen Publications in Mumbai. As a series of four articles it appeared in (The) Mountain Path, in 2004-2007. See also www.advaya.nl.

About Siddharameshwar and his tradition
Master of Self without self. Life Story of Shri Sadguru Siddharameshwar (Jnana Vijnana Yogeshwar). This is what I call in the article ‘the biography’. © Sadguru Shri Ranjit Maharaj, 2010.
http://gvp.cz/~vinkle/zlaty/Master%20of%20Self%20without%20self_optim.pdf
Sri Bhausaheb Maharaj (Life-Sketch and Nama-Yoga); by M.S. Deshpande. Collection of his statements in letters, entitled Nama-Yoga. Belgaum: Academy of Comparative Philosophy and Religion, 1978.
Sri Nimbargi Maharaj (His Life and Teaching); by ‘disciples’. Collection of his statements, entitled Bodha-Sudhe. Belgaum: Academy of Comparative Philosophy and Religion, 1978.
R.D. Ranade and his Spiritual Lineage; by V.H. Date. Mumbai: Bharatiya Vidya Bhavan, 1982.
The Sociology of Religion. A Case Study of Nimbargi Sampradaya; by K. B. Dabade. Mangala Publications, 1998.
‘The Navnath Sampradaya and Nisargadatta Maharaj’, by Catherine Boucher. In six parts; Mountain Path 2014-2016. Part Four, on Siddharameshwar, is Vol. 52, No.3; July 2015. For Catherine Boucher see also:
http://nisargadatta.net/Navnath_Sampradaya.html 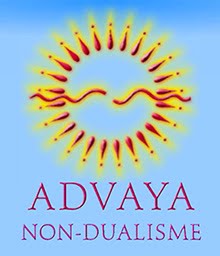